After attending the “The Web Is…” event in Cardiff, my mind was filled with exciting thoughts and I was freshly motivated to get out there and try some fancy new projects (and actually finish them!). One of the talks that stood out to me was Scott Jenson’s great talk “The Web is like water” which you can read on slideshare. Maybe it stood out just because I got a free shiny new toy which goes beep, but I also think the messages were very good food for thought.

While there were many good points made in the presentation, and I encourage you to go read it, I’m just going to focus on the concept behind said shiny new toy here. To introduce the point of all this, physical-web.org have a great quote which sums it up fairly well:

“The Physical Web is an approach to unleash the core superpower of the web: interaction on demand. People should be able to walk up to any smart device – a vending machine, a poster, a toy, a bus stop, a rental car – and not have to download an app first. Everything should be just a tap away.

The number of smart devices is going to explode, and the assumption that each new device will require its own application just isn’t realistic. We need a system that lets anyone interact with any device at any time. The Physical Web isn’t about replacing native apps: it’s about enabling interaction when native apps just aren’t practical.”

Their tag line, ‘Walk up and use anything’, is what this is all about. It will be too frustrating to need an app for every new smart feature coming out; an app for your heating, washing machine, toaster, each public transport service etc etc. So, a potential solution to this unscalable app problem is The Physical Web – a way to bridge physical devices and the web. Essentially, it is a simple means for a physical entity (for example, a bus stop) to broadcast a URL, so that a web-capable device can read this URL and be taken to an appropriate webpage (in this example, the information for the exact bus stop, next buses etc).

This is nothing new in itself, as QR codes have been doing a similar job. But QR codes are pretty much dying out, apart from some very specific applications in which they remain useful. They are just not convenient. To take a picture of a QR code takes time, but I am impatient and lazy, I need things to be more instant! So the new toy we all received at Jenson’s talk was a proposed alternative, a bluetooth beacon, which can programmed to a single URL. In essence, a shouty QR code. 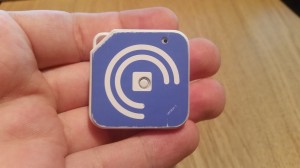 First, you need an app! Yes, the irony of installing an app to tackle the challenge of too many apps has already been pointed out by Scott Jenson, but don’t worry about it too much, you just install it and then it should just run in the background, picking up any signal in nearby range.

It took less than a minute to set up the device once the app was installed. Just open the app, hit the button on the beacon, and the beacon will be found. Program in the new URL, and you’re done! Very easy to use; unfortunately since the last update it crashes every time on my android >_> but this is to be expected as this is all still in the prototype stage.

Initial thoughts on this are good, it’s fairly neat and hassle-free. I did notice my battery life go down a lot faster in a day after running this, as you can expect with having bluetooth on; but I can certainly get behind the convenience of just opening my phone, seeing the message that there is a beacon nearby, and instantly following this to get my information. A great example of the application of this can be shown in this 20 second video, where the user is able to operate a vending machine via this process.

This requires both the user and the vending machine to be connected to the internet, and works as follows:

It is getting a lot cheaper to hook any device up to the web these days, so this is a very feasible example. In the future, perhaps, the vending machine will not need to be connected to the internet, and the process could look like the following:

It’s early days yet, but this looks quite promising for such a simple process. I have collected two of these so far and already it isn’t enough for me! I encourage you to keep an eye on this one and check out the slides and twitter.

Ross is a Software Developer at Box UK, born the same year as the web itself. Interested in solving problems and continually developing personal skills, he enjoys working on a variety of projects, whether it be a small internal project or an international project for a multi-billion pound business.