For Georgian financial institution TBC Bank, digital touchpoints aren’t confined to desktops, smartphones and tablets. As Georgia is still largely a cash-based economy, their customers rely on remote channels such as ATMs and kiosks to complete a wide variety of common banking tasks. 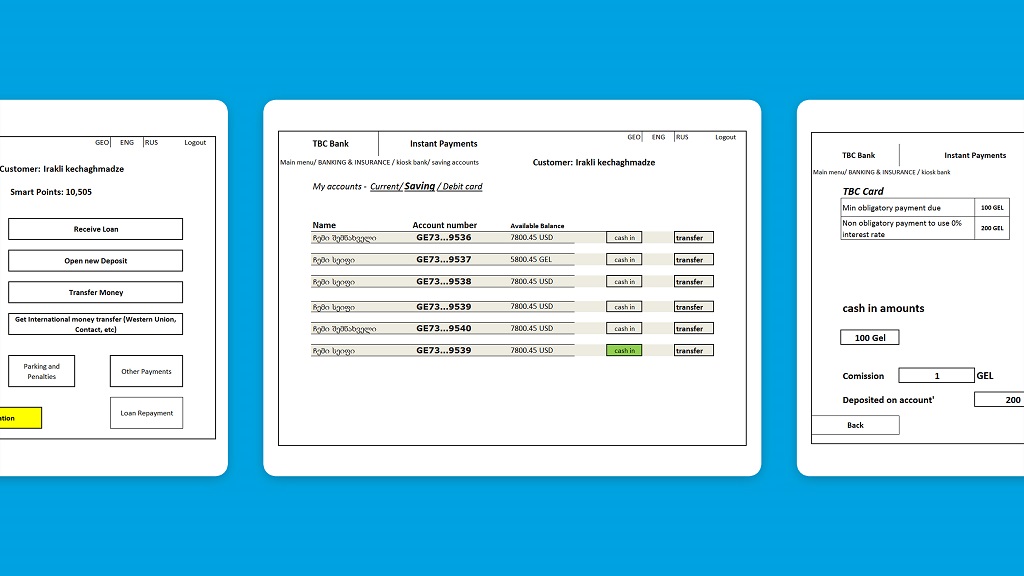 In line with their goal to provide the best multi-channel experience in the country, TBC Bank wanted to validate their new kiosk interface designs before embarking on development.

By combining interactive prototypes with a realistic physical setup, we uncovered potential issues that otherwise may have gone unnoticed – ensuring that users were able to cash in through the kiosks, and helping TBC Bank cash in on their investment too.

With remote channels so integral to Georgian banking, the new interface designs covered a wealth of user journeys, from paying household bills to topping up mobile phones. Added complexity came from the fact that the kiosks had to support a number of specific requirements, such as accepting multiple currencies and enabling user login for secure tasks.

There was only one approach that would deliver the rich, qualitative insights needed to address all these considerations: lab-based usability testing.

While the cultural and banking system differences between the UK and Georgia meant that some testing could only take place locally, many valuable high-level insights regarding findability and efficiency could be gained from testing with UK-based participants – and Box UK’s purpose-built usability testing suite provided the ideal venue.

Putting the pieces in place

Before testing began, however, there was a lot of work to be done. Our User Experience (UX) consultants realised that to get representative results, a realistic environment was needed. A touch-screen banking kiosk was mocked up in the testing lab, and participants were provided with imitation money and a TBC Bank debit card. Participants were also selected according to strict criteria, to make sure that they accurately reflected the types of people who would ultimately be using a system. As a result, the final group ranged in age from early-twenties to early-forties, and were familiar with a range of banking products including current accounts, credit cards and mortgages.

Keeping a close eye on proceedings

Once all necessary preparations were in place, the sessions got underway. Participants drew out cash, made deposits, topped up phone cards, and checked bank balances. Through every stage, one of our UX consultants was on hand to provide guidance – asking questions and noting behaviours such as facial expressions and body language. And to make sure that nothing was missed, feeds were set up to record both the user and the screen, and relayed to a separate room where a second UX consultant observed and conducted real-time analysis.

Because users were able to interact with a realistic banking kiosk, they could more easily get into the mindset of an actual TBC Bank customer – which meant better quality results. It also enabled us to uncover usability problems that would not have been found through desktop or tablet testing, such as users missing notification messages while inserting money.

Our approach gave TBC Bank the information they required to effectively make improvements, and the confidence they needed to move forward. If you too want to maximise the value of your usability testing, you know what to do: get in touch today.

x
Tell us about your project...
Sign up for future emails about the latest industry news and insight
Please enter a valid email.