Many of my happiest memories growing up involve computers and technology. I have such fond recollections of tinkering away for hours on our sturdy Amstrad CPU 6128, writing little computer programmes in BASIC. It always seemed natural to me, and yet I was also quite conscious this was seen as more of a “boys’ thing”. And indeed, the technology industry is a male-dominated world. This always seemed intriguing to me considering I knew many girls who also also loved using computers, so why were there so few women working in these areas?

Statistics published by the National Center for Women and Information Technology in 2016 stated that in the US in 2015 “women held 57% of all professional occupations, yet they held only 25% of all computing occupations”. In the UK, according to WomenInTech.co.uk, women make up just 17% of the workforce in technology industries whilst only 7% of computer science A-level students are female.

Throughout history, however, women have played a crucial part in technology industries. Not only were they there, but they were making a huge impact through the work they were doing. And so, on International Women’s Day, it seems fitting to play tribute to a couple of my favourite women pioneers who both have fascinated and inspired me over the years.

Some argue that the very first computer programmer was indeed a woman – the poetically-named mathematician Ada Lovelace who in the 1840s, whilst working on fellow mathematician Charles Babbage’s proposed computer the “Analytical Engine”, wrote what many call the first algorithm to be executed by a modern computer.

Grace Hopper is another integral figure of the computing industry. Rear Admiral Grace Hopper was one of the first computer programmers for the Harvard Mark I computer, and was one of the first people to create a compiler (software written in one programming language that will effectively translate into another programming language). Her work lead to the development of COBOL, a language still in use today.

Grace is also said to have coined the phrase ‘a bug in the machine’ – during work on the Harvard Mark II, when an actual moth was discovered in between points in relay 70! Whilst very likely the phrase was already in use, it is a great story.

Margaret Hamilton is a computer scientist and systems engineer, who wrote code that enabled man to achieve arguably one of the, if not the, greatest feats of the 20th century – landing on the moon. At just 24, Margaret got a job at the Massachusetts Institute of Technology (MIT) who at the time were working on the space programme. Hamilton became responsible for the onboard flight software on the Apollo command modules and lunar landers and her team also developed software such as recovery and error detection. Dramatically, just three minutes from reaching the dusty surface of the moon, the Apollo 11 mission averted an abort of the moon landing due to Hamilton’s systems. It was one of the most critical points of the moon landings, and indeed, history.

Interestingly, Margaret Hamilton features in a recent Lego set: Women of NASA. I have long been a fan of Lego, and indeed NASA, so nothing pleased me more than this lovely kit championing pioneering women involved in the space agency. The kit also includes Sally Ride – the first american woman in space on the shuttle Challenger, someone who overcame many barriers; Astronomer Nancy Grace Roman – the ‘mother of Hubble’, who was instrumental in the planning of the Hubble telescope (one of the most versatile and important telescopes ever built); and the uber-talented Mae Jemison – not only the first African American woman to travel into space, but a physician, teacher, actress, dancer, Peace Corps volunteer and founder of two technology companies. 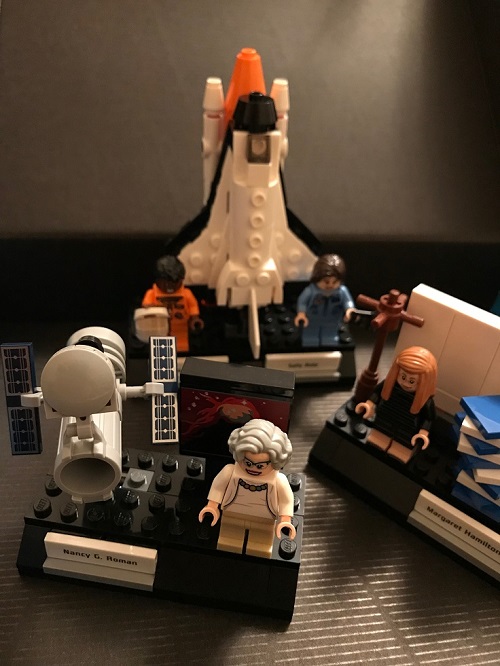 These are just a couple of examples of where extraordinary women have not only excelled in technology, but have been integral to monumental achievements and discoveries. And truly, even in this industry that continues to be dominated by men, you only need scratch the surface to discover great women achieving great things today.

The technology industries are ever-evolving and exciting to be involved in. They are also incredibly varied in terms of the roles available within them too. Here at Box UK we have women in pretty much every department – coding, business analysis, QA, UX, design, marketing, HR, sales, finance…

On International Women’s Day 2018, I celebrate all of these people and more and hope that, the more we recognise and champion all of these women’s incredible achievements, the more we can inspire future generations of women and girls to explore careers in technology, and achieve simply brilliant (had to be done!) successes.