Modern life and work can often feel like an endless juggling of tasks and prioritisation; whether it is trying to get all your ‘life admin’ completed, or trying to manage a growing ‘to-do’ list at work. In these kind of environments – where suddenly everything seems critical and significant – it can become so difficult to sift through and schedule things, that you end up failing to get any tasks done at all.

Dwight D. Eisenhower was the 34th president of the United States, serving from 1953 to 1961. A general in the United States Army, he served as the Allied Forces Supreme Commander during World War II, and later became the first supreme commander of NATO. Consequently, Eisenhower was faced with a mammoth task list each day, and often had to make difficult decisions regarding which of these duties he should prioritise on any given day.

This epic task management conundrum led Eisenhower to invent what is now known as The Eisenhower Method/Matrix.

What is the Eisenhower Matrix?

The Eisenhower Matrix is a method by which to categorise and prioritise jobs by their urgency and importance. It is formed of four quadrants: Do; Decide; Delegate; and Delete. 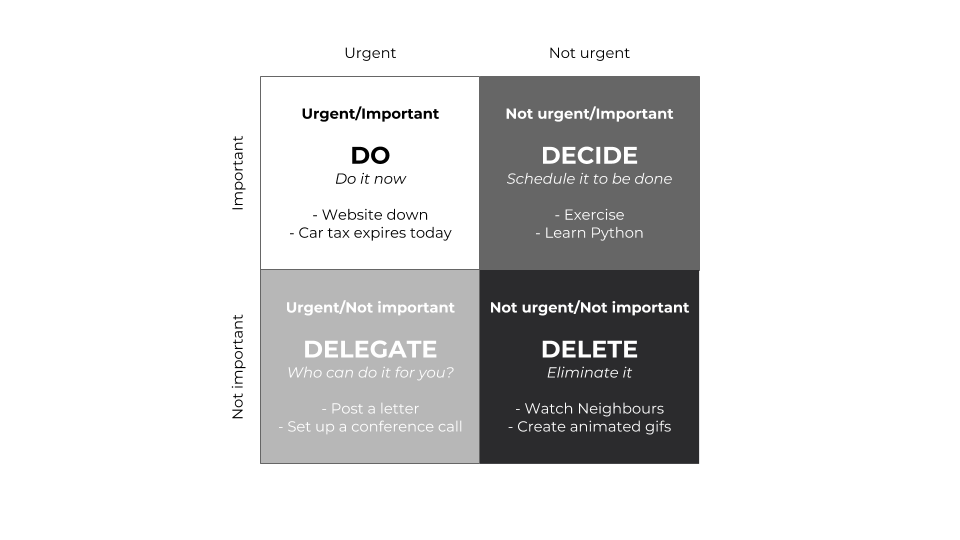 As you can see, if you break down your to do list and categorise accordingly you can begin to establish which tasks really need to be done immediately, which ones can wait or be delegated out, and which ones you can get rid of completely.

This is really a ‘must do now’ task – the crisis, the emergency, the deadline. Your web site might be completely down – it must be fixed immediately. Your car tax is up today – you must renew it as soon as possible.

The jobs here are important, but do not need to be done immediately and so can be scheduled for the future; such as exercising, learning a programming language, or writing a company blog post (like this one!).

The third quadrant – Not important/Urgent

Tasks here are urgent – they need to be done immediately – but are not as important (such as setting up conference call equipment, or sending out emails), and so can be delegated to someone able to pick them up.

The fourth quadrant – Not important/Not Urgent

Items in this section can usually be eliminated altogether! These are the ‘tasks’ we often all end up spending time on, but ultimately are neither important or urgent, fast becoming time wasters – think checking social media, watching Neighbours or creating your own custom gifs for GitHub.

Putting it into practice

The main goal of the Eisenhower Matrix is to enable you to really focus on what is important to you, and to act as a filter to remove all the excess noise our busy schedules bombard us with.

The idea is to spend most of your time in the upper two quadrants and to try not to spend as much time in quadrant 3; tempting as it might be, as these tasks can often feel like they require immediate attention. Here, learning to delegate is key – is there someone else who has the availability and the skills to get the task done? If not, could they manage a good chunk of it with some guidance/demonstration from you?

Personally, since I’ve started to use this method I have found I not only get more done, but also I find I’m better able to schedule the less urgent tasks on my list – helping prevent them from ever moving into the urgent quadrant. In this way, the number of urgent and important tasks can be reduced, leaving you with a much more balanced workload – and calmer mind!

Another really great aspect of this approach is that it can be used outside your work life too. Keeping the Eisenhower Matrix in mind helps ensure you’re always questioning what really needs to be done first, and as such can help you identify – and then snuff out – any bad habits.

Eisenhower was credited with this quote, which gets to the crux of the idea behind the method:

Whether he really said this or not, the Eisenhower Matrix can really help you prioritise your workload efficiently and effectively. I urge you to try it out for yourself!

Have you found the Eisenhower Matrix useful in helping you manage your workload? Get in touch via our Twitter and LinkedIn to share your feedback.

The challenges of project management

Looking at the common challenges faced when deciding on a project management approach.

Definition of ready in agile

This article explains some constructs we recommend to mature tasks in a transparent way, to a state where they are…

If you're convinced of the benefits of Agile, but are struggling to roll the approach out across your organisation, this…