Helping Sophos take a potential software tool from initial concept to tested prototype in a matter of days, as part of a Google Ventures Design Sprint.

Over 100 million users in 150 countries rely on Sophos to deliver simple solutions to complex security challenges – so the quicker they can do this, the better. That’s why they embarked on a Google Ventures (GV) Design Sprint, compressing the process of designing, prototyping and testing concepts into just five days. 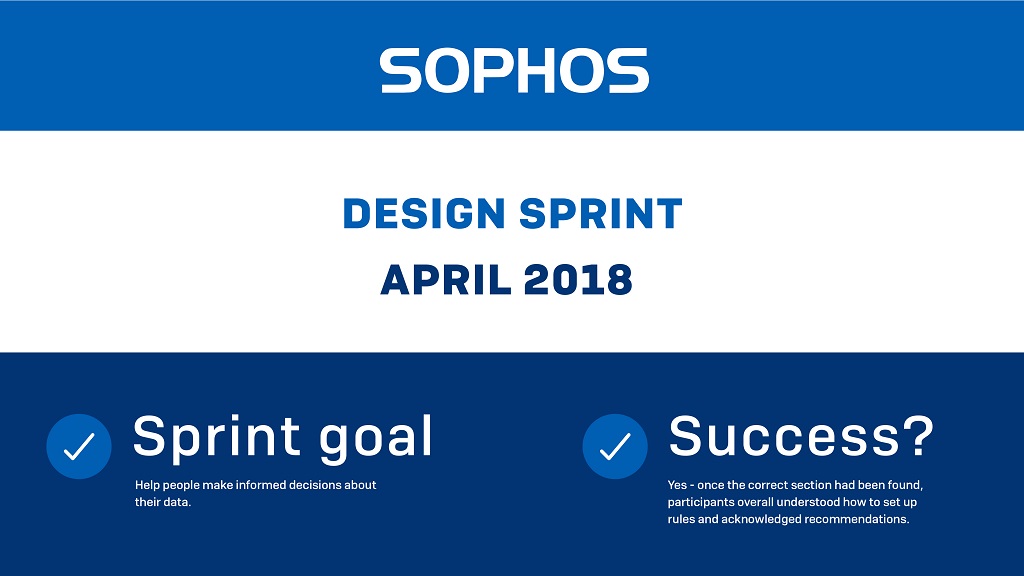 Having rapidly prototyped a solution to an identified challenge, Sophos brought this prototype to Box UK for testing. Understanding that speed was of the essence, our User Experience (UX) consultants completed six hour-long usability testing sessions in a single day, before producing an infographic detailing top-level findings and suggested next steps.

Through the successful delivery of this project, Sophos has gained a proven, tested prototype that they can now take through to development. More than this though, it’s also equipped them with a set of techniques they can apply to future design projects – helping to maximise efficiency and ensure critical security tools can be launched to market without delay.

"We were already making great progress in embedding a culture of user-centred design at Sophos through our own in-house usability testing but Box UK has helped us to broaden our scope. Not least because it’s given us access to a usability lab, non-Sophos customers, and non-technical users."

A 12-month programme of testing

Sophos was already working to embed a user-centred design culture, and had previously engaged with Box UK to support them in this aim – agreeing a programme of testing that allowed their internal UX team to run a set number of projects as and when suitable over a 12-month period.

This approach enabled Sophos to benefit from the qualitative insight offered by usability testing while maintaining the highest levels of flexibility and control, so that any effort could be directed to where it would deliver the greatest returns.

As part of this testing programme Sophos had already conducted several projects, targeting various elements of their software security tools. For the final instalment, however, they were keen to try something different…

The Sophos team had been exploring techniques to reduce the time needed to take design ideas through to testing, and the GV Design Sprint model had immediately attracted attention. An innovative approach to answering critical business questions, it’s been described as a “greatest hits” of business strategy, innovation, behavior science, design thinking, and more – packaged into a battle-tested process that any team can use.

With speed critical to the sprint’s success, Sophos asked that Box UK manage the entirety of the project’s testing requirements, from participant recruitment and payment through to drafting the test plan and analysing session findings. This enabled the Sophos team to focus all their efforts on identifying a suitable area of focus, and defining an effective solution.

The challenge Sophos chose to tackle was to “help people make informed decisions about their data”. This was particularly relevant in light of the soon-to-be implemented GDPR legislation, and provided the team with a clear sprint goal that would guide subsequent design activity. The team then took this problem and began to sketch solutions, before translating viable ideas into a single, testable hypothesis and high-fidelity prototype. 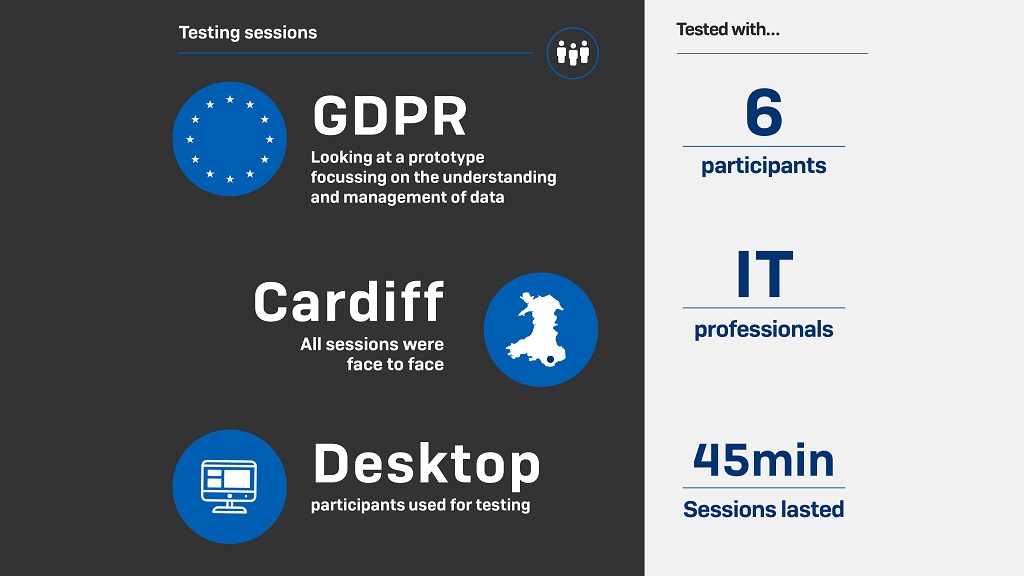 As this was taking place, our UX consultants were already preparing for the testing sessions due to take place on the final day of the sprint – having agreed stringent recruitment criteria with Sophos at the outset that enabled us to begin identifying suitable participants and scheduling sessions as quickly as possible.

Once Sophos started to shape the prototype, we also began to work on developing a robust test plan in parallel – and were also on hand to ensure that both the prototype and test phase had a clear structure so that feedback could be rapidly gathered and analysed.

Armed with everything they needed to conduct effective testing sessions, our UX consultants tested with six participants during over the course of the final day, capturing a wealth of valuable insight into how well the prototype had performed against the stated sprint goal.

Immediate user feedback was extremely positive – validating the proposed solution and giving Sophos confidence in investigating the concept further. However, to ensure that the client gained the maximum value from the testing that had been conducted, our UX consultants also provided a deliverable that Sophos could take with them into any subsequent design and development phases for the proposed new tool.

In keeping with the lightweight, rapid nature of the project, this took the form of a high-level infographic detailing:

In addition to this, short video highlights were made available, alongside recordings of the full testing sessions. All this information was presented back to the Sophos team, including stakeholders from the UK, USA and Germany participating remotely. In addition to this, the infographic and video clips were made available to a wider Sophos audience – helping the team quickly and easily understand the purpose of the study, and how successful it had been.

Demonstrating how ideas can be taken from initial concept to tested prototype extremely quickly, the Google Ventures Design Sprint represents a key milestone in Sophos’ drive for user-centred design – helping the organisation stay ahead of the latest trends, updates and opportunities in an increasingly fast-paced digital space.

We’re proud to have supported Sophos through this innovative and experimental project – and would love to do the same for you. Get in touch to find out more about what we have to offer.