What is reputation, and why does it matter?

According to the ever-accurate Wikipedia, reputation is a “social evaluation of the public towards a person … or organization”. This evaluation is considered when making decisions regarding that person or organization, such as whether to make a purchase from them. In fact, according to a reference in the same Wikipedia article, a good reputation can be directly linked to the ability to charge higher prices (for example, on eBay).

In some ways, reputation is the post-sales equivalent of what brand is to pre-sales. You can buy brand, but have to earn reputation. Especially in the online world, where brand has less sway over your purchasing and visiting decisions, reputation should be your long-term priority.

In short, then: reputation = revenue. 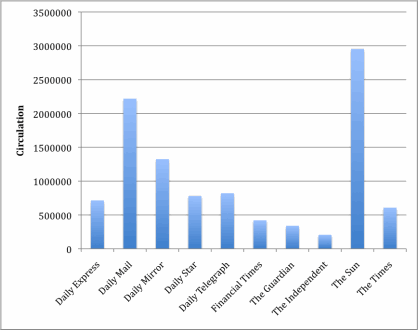 Measuring reputation – and importantly, how it changes as you implement tactical decisions or write about particular subjects – is therefore incredibly important, so that you can determine what works and what doesn’t.

In the physical world, this measurement is especially difficult, and relies heavily on surveys. It’s not particularly straightforward online either, but at least we have some fairly easy-to-calculate metrics that can be used as starting points.

To check the validity of each of these metrics, I’ve included their values (measured on 3rd April 2009) for the websites of ten popular UK newspapers:

The number of inbound links to your site is clearly a measure of the width of your reach. Of course, this could just be myriad negative complaints or comments about you, so sheer volume of links is not a particularly accurate metric.

There are numerous websites that display your PageRank, though unfortunately at the moment Google only expose a simple 1-10 rounded figure of their internal, more precise value. 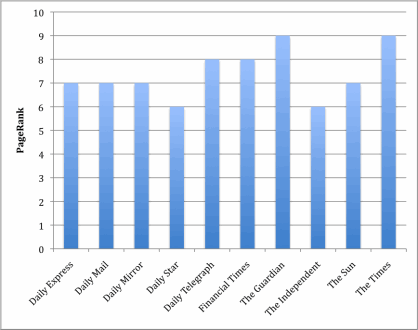 As a loyal The Independent reader, which has a strong reputation, I was initially unsure of these figures. I then remembered that these are measures of Online Reputation, and therefore actually make sense: The Independent do not have nearly as much presence or good will as The Guardian online, which invest heavily in online services.

Since Facebook introduced an official feature for people to affiliate themselves with products and services – Pages – organizations have been (often half-heartedly) creating miniature presences for themselves within the yo-yo’ing messiness of Facebook.

As people opt-in to be fans of organizations, their public news feed displays their affiliations to their peers. Therefore, it could be argued that the reputation of these organizations is a deciding factor for those that become fans (who would want their friends to know that they are a fan of something with a poor reputation?). 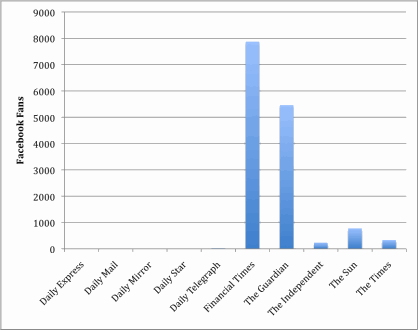 The statistics show that, surprisingly, many UK newspapers do not have an official Facebook Page, and that there is considerable deviation in fan numbers for those that do.

It’s common knowledge that Twitter follower numbers can be fairly easily manipulated; you can quickly gain a massive following by relying on others auto-following back (I also recently demonstrated this with @twitexperiment).

Assuming that you aren’t deceptively manipulating your follower numbers, they should be a fairly accurate representation of your online reputation. For investigating the reputation of other organizations, the number of mentions (re-tweets or via tweets) of the organization (use Twitter Search to find these) could prove less open to abuse. 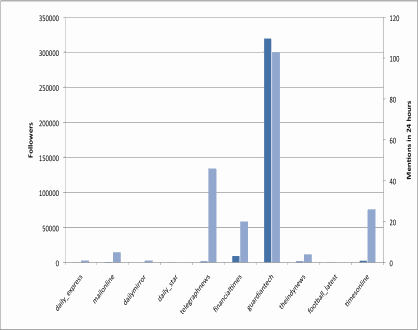 Many of the UK newspapers (including The Sun and the Daily Telegraph) operate multiple twitter accounts, so a direct comparison is not totally accurate. Also, many of the newspapers’ journalists maintain successful Twitter feeds in their own right (for example, Jemima Kiss from The Guardian). For the sake of this article, the most popular official Twitter feed from each newspaper has been used.

RSS (or ATOM) feeds are a useful measure of reputation, as people must opt-in to receiving them, and are generally only trusted by people if they can be sure their daily news will not be polluted with low quality items. Therefore the reputation of the organization behind each feed is at least subconsciously assessed before agreeing to subscribe to the feed. Feed subscriber numbers are also not easily susceptible to abuse. 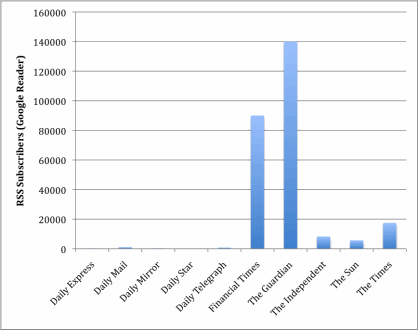 As with Twitter feeds, many (in fact, most) of the UK newspapers maintain multiple feeds. The most popular single feed from each newspaper has been used for this article.

Exact RSS subscriber numbers are not publically available; I have used the number of subscribers as reported by Google Reader.

Simple figures for unique users or page-views are not appropriate for measuring reputation: well-documented link-bait techniques can be used by any publisher to attract traffic.

A better metric for reputation may be repeat visitors, or better still, the ratio of repeat visitors to total visitors. As a website’s reputation increases, it should naturally find that more of its audience is periodically checking back and/or trusting links they find to it. 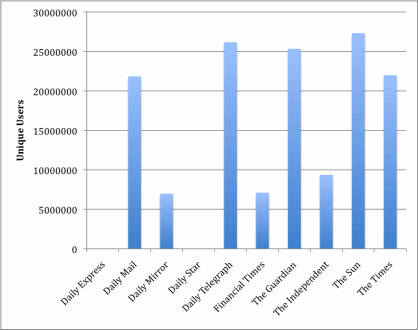 Note that figures for Daily Express and Daily Star were not available. The statistics for Unique Users were the best I could find that were publically available (ideally it would have been interesting to also find numbers for loyalty and duration). Most statistics are for the month of February 2009.

Web users tend to bookmark resources that they trust and find useful (well, that and videos of cute rabbits eating carrots), and hence the reputation of the bookmarked resource is assessed.

With public social bookmarking services becoming increasingly popular, it is now easier than ever to analyze how many people are bookmarking your pages.

A number of easy-to-calculate metrics have been explored that can be used to partially assess the reputation of an online person or organization.

As for UK newspapers, it would seem The Guardian hold the crown for best online reputation, which is in stark contrast to their physical circulation figures. Conversely, given their circulation figures, the Daily Mail is considerably underperforming with their online reputation. This discrepancy between the two newspapers’ online success is almost certainly influenced by their respective reader demographics (younger Guardian readers, older Daily Mail readers), together with a long-standing, forward-thinking investment in the online space by The Guardian. 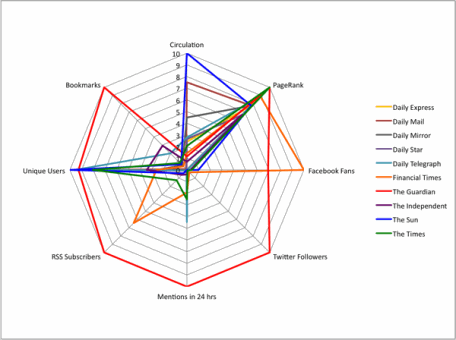 The graph above shows the various reputation metrics normalised (to a score out of ten) for each newspaper.